We are blown away by the support received by the Peterborough Police Cadets helping to make a difference to children and families affected by serious crime.

Last December, the Peterborough Police Cadets spent a night in the cells with no phones, eating prison food and sleeping on a matt with just a blanket.

We are incredibly proud of the Cadets for completing this difficult challenge and for raising a total of £1,300 with Cadet Hasifa Yasin raising the most, stating- “It was a great experience raising for those that need the services from Embrace, they do an absolutely great job.  It was so lovely to see how many people who were willing to donate to such a good cause”.

With the Peterborough Police Cadets making the most of every opportunity and keen to help support our cause. Marc James, Embrace’s Support Services Manager, asked the group what they thought of plans to launch a peer group listening service for young people. He also asked for volunteers and got an enthusiastic response!

Embrace was thanked by Sergeant Heidi McAdam and with plans to train the Cadets as young listeners we look forward to working together help to make a difference to young victims of crime. 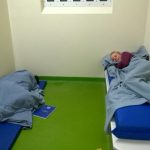 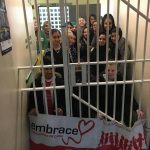 Dear Santa- Spreading Christmas cheer across the nation for child victims and witnesses of crime.