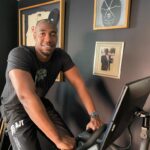 He joined a team of eight police officers from Cambridgeshire and Bedfordshire Police and a police officer’s husband to take on the 1,190 mile challenge.

Alex, who played for England between 1998 and 2002, now runs his own coaching company and is a cricket coach at Kimbolton School in Cambridgeshire.

He said: “I was happy to be involved in this challenge because my wife Mel is a police officer and sees first hand the vital work Embrace does support child victims of crime and their families.

“The team was quality but after a few days my legs felt like stone!

“It was great to be able to make a difference and enable Embrace to support more children who have suffered trauma because of crime.”

Fellow team member Jenny Bryce, from Bedfordshire Police, said: “We have been overwhelmed by the support we have received.

“It encouraged us to get on our bikes each day.

It was our pleasure to have been able to support Embrace as most of us have seen how much they support children affected by trauma.”

Anne Campbell, Chief Executive of Embrace Child Victims of Crime, said: “Thank you to Rachel Chandler, Mel Tudor, Alex Tudor, Jenny Bryce, Kerry Smith, Verity McCann, Jamie Williams, Suzanne Pickard, Rob McCann and Peter Ward for this fantastic achievement. We are so grateful for your support. It has been a tough year for fundraising for charities like ours and we really appreciate every pound we receive to help even more children harmed by crime.”

Embrace Child Victims of Crime is a Peterborough-based national charity that provides emotional and practical support to children and young people harmed by crime.

Last year the charity supported 3,000 children across the UK.

Many of the children the charity supports have been victims of sexual and physical abuse, neglect, domestic abuse or have lost a parent through homicide.

Over £5,000 worth of toys and activities kindly donated by KidsOut to Alfie’s Hardship Fund

DOUBLE YOUR DONATION TO SUPPORT YOUNG VICTIMS OF CRIME