A brand new drag car built by an Exning-based motor engineer has made its debut at the Santa Pod Race Way, where it provided a winner without turning a wheel.

the car, a VW ‘Funny car’ named Nitro Bug, has been lovingly constructed over four years by Andy Raw. who owns VW and Audi specialists AMR Motors in Exning.

Andy and is racing partner Karl Harrison took the car to Santa Pod on Friday as a static display to raise money for their chosen charity Embrace Child Victims of Crime (CVoC). To help boost awareness of the charity, the car was branded with the Embrace logo and had Alfie the Embrace Bear riding shot gun.

‘Nitro Bug is a car with a big heart’, said Andy ‘I really hope that through it we can raise lots of money for this incredible charity. The work they carry out to help children affected by crime overcome trauma is a true blessing.’

Andy and Karl are planning to be at events with the car throughout the summer, the next appearence being at Santa Pod Mopar Euro Nationals on July 27 for another non-racing day before they start competing in Nostalgia Nitro Funny Car class races.

Embrace CVoC is a national charity set up by police officers in Cheshire after the Warrington terrorist bombing in 1993. It now works with officers in every force in the uk and has helped more than 6,000 children, mainly victims of domestic violence and sexual abuse. 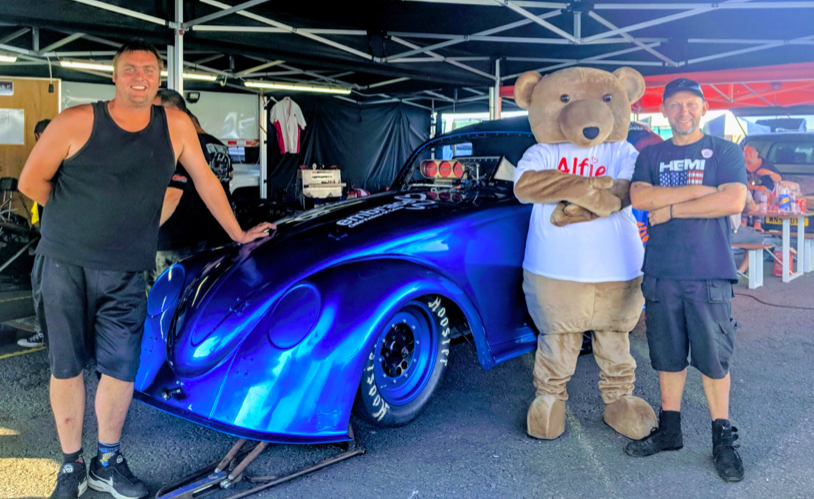 Karl Harrison, left, with Alfie the Embrace Bear and owner-driver Andy Raw with their VW Funny Car, Nitro Bug, which is helping to promote national charity Embrace CVoC at Santa Pod on Friday.